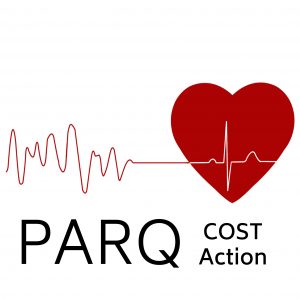 Sudden cardiac arrest (SCA) is one of the top causes of mortality in industrialised societies. SCA is the sudden failure of the heart to pump blood through the body, caused by cardiac arrhythmia (ventricular fibrillation, VF) most commonly secondary to coronary heart disease (CHD), i.e., acute myocardial infarction and myocardial ischemia. This devastating condition is responsible for 50% of cardiac deaths, which corresponds to 2 million deaths in Europe. Much progress has been made to reduce the burden of SCA for society through improved CHD management, development of community-based cardiopulmonary resuscitation, and increased use of implantable cardioverter defibrillators. Still, SCA remains the cause of 15–20% of deaths in Western societies and 20% of all natural deaths in Europe. If left untreated, SCA is fatal within minutes. Since SCA often occurs unexpectedly outside the hospital setting, it is a challenge to provide timely and effective treatment. Therefore, SCA occurs mostly in individuals who have never been examined by a cardiologist. The knowledge to predict an individual’s risk of SCA is lacking and individuals are unaware of their personal risk to experience SCA. Therefore, prediction and prevention of SCA is challenging and patients rely on first-response treatment. The treatment in the first minutes after SCA provided by citizens, police officers, firefighters and Emergency Medical Services is critical for survival.

Strikingly, there are large regional differences in survival rates after SCA across Europe. The EuReCa ONE study investigated survival chances after cardiopulmonary resuscitation in out-of-hospital cardiac arrest patients in 27 countries across Europe. The survival percentage ranged from 1.1% (Romania) to 30.8% (Switzerland). These numbers indicate that regional differences in individual risk, prevention and treatment have a major impact on an individual’s chance to experience SCA and the chance of survival after a SCA event. Therefore, to prevent SCA and to improve survival rates across all European countries it is imperative to investigate:

➢ Regional differences in preventive measures and first-response treatment strategies and their effectiveness.

The Mission & The Challenges

The PARQ mission is to implement this knowledge to develop prevention and treatment guidelines to reduce the differences in survival rates and the overall burden of SCA across Europe. The first step in achieving this challenging goal is to collect and share data across all European regions and learn from differences in prevention and treatment strategies. Hence, sufficiently large cohorts of SCA patients with detailed clinical and environmental data are required. Although efforts to collect clinical data and biological samples exist at the national and international level, co-ordination between these study networks is lacking. The harmonization of data collection and analysis should be improved to enforce collaboration and data sharing between cohorts. In addition, the different European countries and regions are not equally well represented in existing research efforts. Hence, there is a need for a pan-European network to connect all stakeholders in SCA and resuscitation science and develop standards for research activities.

The PARQ Action will be built on two pillars. Read more below.

Multiple risk factors are associated with SCA occurrence. In each individual, a unique interaction of inherited, acquired and environmental risk factors determines the risk of ventricular fibrillation leading to SCA. Inherited risk factors may arise from variation in genes that control cardiac electrophysiology. Also gender accounts for variation in SCA risk; men have a higher chance of suffering from SCA, but women are less likely to be resuscitated and have lower chances of survival. In addition, acquired risk factors, such as myocardial ischemia, type II diabetes as well as environmental factors (in particular, socio-economic factors that may be related to psychosocial stress) can contribute to SCA. Inclusion of inherited, acquired and environmental factors as integral components of SCA occurrence and outcome is critical to establish new guidelines and preventive actions with cross-border relevance. In summary, designing individualized prevention and treatment strategies requires elucidation of the complex interplay of risk factors. Ongoing initiatives including large European cohort studies aim to unravel the interactions of inherited, acquired, and environmental risk factors.

Multiple factors influence the chances of survival after SCA. The first minutes after SCA critically impact patient prognosis, yet the first care often occurs in an out-of-hospital setting. The delay between SCA and first-response treatment is the most important determinant of survival. European Resuscitation Council guidelines for resuscitation have been established and include instructions for first-response treatment: early recognition and call for help; early cardiopulmonary resuscitation, early defibrillation and standardized post-resuscitation treatment. Still, large disparities between SCA survival rates across Europe exist. To understand how these differences arise, other determinants of survival, such as patient characteristics and regional differences in SCA management, should be considered.

Integration of Pillar 1 and Pillar 2

Most of the knowledge about predictors and risk factors of SCA is based on isolated studies focusing on single clinical risk factors and genetic risk factors. However, researchers acknowledge that SCA has a complex genetic basis and its manifestation depends on multiple clinical and environmental risk factors. To tackle the complexity of individual risk prediction in SCA, as a starting point, the network will benefit from an established European SCA database that will be available for researchers connecting to the PARQ Action. The database will be expanded to address the challenges as specified in the section above. Thereby, the Action members have defined three innovation focus areas:

Action in these three focus areas has never been integrated and have never been established on such a broad scale. We will address these challenges in various working groups. Read more below.

Working group 1: Coordination of sample collection and harmonization of data

Working group 1 aims to coordinate biological and personal data collection to enable future studies into risk prediction and prevention of SCA (WG2), and resuscitation strategies (WG3). Focus points of this workgroup are: the organization and expansion of current SCA population cohort studies; the coordination of the development of best practice guidelines for harmonization of data handling and analysis across Europe; the coordination of collection and integration of personal health records derived from general practitioners (GPs) in cohort studies.

Working group 2: Coordination of research aimed at prevention of SCA

This workgroup will identify the regional and national differences in emergency response and treatment procedures for out-of-hospital SCA between network members. This is envisioned as a continuously expanding process since the network will keep growing with new members from other countries.

These tasks will be accomplished through video conferences, work group meetings, short-term scientific missions, a symposium, development of dissemination material and scientific publications.

Working group 4 aims to expand the PARQ network through communication and dissemination activities. This will strengthen the interactions between experts in SCA risk prediction and resuscitation science to establish research collaborations in these areas.